How to Row Faster: Using the Rowing Sprint Start 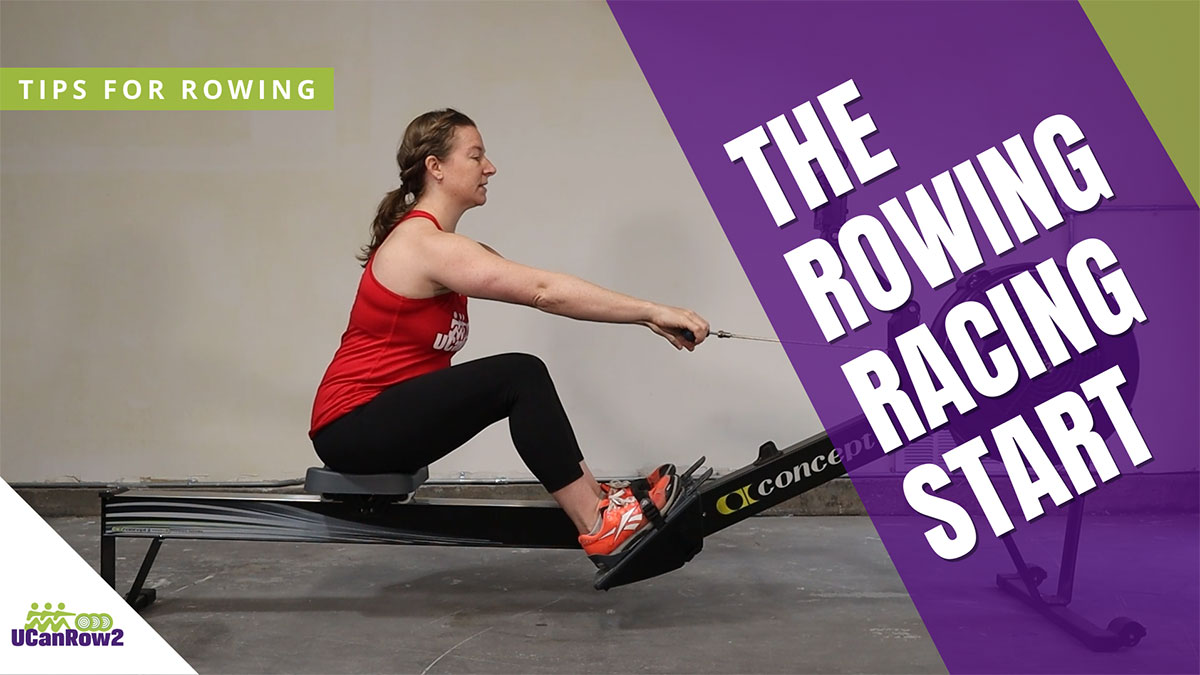 The rowing sprint start is a super effective tool, not just for when you’re actually RACING on the rowing machine, but any time you want to get your machine going a little faster.

And it’s a tool that anyone who wants to know how to row faster should have in their back pocket.

What Is a Rowing Machine Sprint Start?

Also known as a “racing start,” it is typically used in competitive indoor rowing, especially short races of 2000 meters or less.

It’s a perfect way to get the machine – and yourself – moving quickly, efficiently, and safely. And it’s a whole lot easier on your body than either trying to heave yourself with your back or yank the handle in quick short strokes with your arms!

Simply put, the sprint start is a series of shorter, quicker strokes that allow you to build up your intensity quickly and efficiently. They use the power of your LEGS to generate the force that will get the machine moving, and get you to your target split as fast as possible.

There are lots of different formulas that work for this, and if you’re big into competitive indoor rowing you will want to experiment to find the sprint start strategy that feels best to you.

The one that UCanRow2 lead master instructor Cassi Niemann teaches in our instructor seminars, and that we teach to our coaching clients and our general fitness rowing machine workout students, is a five-stroke formula: 1/2, 1/2, 3/4, lengthen, full.

What is Considered a Sprint on a Rower?

A sprint is any of the shorter distances on the rowing machine, from the competitive gold standard, the 2000-meter race, to 1000 meters, or even the shorter times and distances that have become popular in the last few years with the explosion of indoor rowing.

Five hundred meters is now a common distance, and you can also race for as little as 1 minute or even 100 meters

The time it takes to do any of these pieces depends on who’s rowing them, but in most cases, a competitive 2k time will be well under 10 minutes, and a 500-meter piece will be at or below 2 minutes, for example. Many competitors row the 100-meter distance in less than 20 seconds.

Talk about a situation where you need to be able to get moving quickly!

[Want help to get set up correctly on the rower? Grab our free checklist HERE!]

How to Use the Racing Start in Indoor Rowing

Sure, people use starts all the time when they’re competing, for example in 2k races and other indoor competitions. It’s a great way not only to get up to speed quickly but also to manage that start-of-race adrenaline!

But did you know it’s ALSO a great way to get moving in other situations?

And the initial formula is the same regardless of the situation. The only thing that changes is the intensity with which you do it.

Use the Racing Start in a Workout

If you’re in a regular workout or a rower sprint workout (or you’re coaching one) the idea is simply to start with shorter, lighter strokes that make it easier and safer to get the rowing machine moving.

You’ll start with short, half-slide strokes, then gradually lengthen them on both ends, adding more layback at the finish and compression moving into the catch.

Use it at the beginning of a workout, even the warmup, to gradually build speed.

To reinforce the start sequence in advance of the main workout, include a couple of rounds of it in your warmup (not necessarily from a dead stop). That helps to groove the pattern so it’s easier to employ when you really need it.

You don’t have to do that on every workout, but it’s a good idea to be sure to include it before an interval workout or on a high-intensity rowing sprints day.

When to Use the Racing Start On a Longer Row

The 5-stroke start sequence doesn’t have to be used just at the beginning of a workout or interval!

You know that moment where you start to feel like somebody put lead in your machine? Maybe partway through a 10k row or a half-marathon? Drop in the five-stroke sequence to pick up your pace and give yourself a little lift.

Do it as-needed, or as often as every 500 or 1000 meters on a distance like a 10k row. Just keep in mind that the higher intensity of the start may be more tiring, so be sure not to overuse it.

Don’t want to think about doing a specific sequence? Just focus on taking five strokes in the middle of the slide, getting longer on the ends as you go, and building up to a strong pace.

That’s really all it takes to get started well.

In a higher-intensity or circuit workout where you’re trying to go as fast as possible or row as many meters as you can in a certain amount of time, the racing start is perfect for getting to your target split quickly.

And when you have adrenaline going, be it in a regular workout or a race, it’s important to manage it.

If building intensity is the goal, you’ll make those strokes a bit faster and more powerful, really emphasizing QUICKNESS and the push with your legs during those first five strokes.

How to Row Faster: Include Settling in Your Race Plan!

Especially if you’re racing, it’s just as important to know how to SETTLE your stroke as it is to know how to start it quickly, and to include that in your race plan.

Much as you might want to keep up that super-fast starting stroke pace, that will quickly cap out and you run the risk of the infamous “fly and die” where you run out of steam way before your race or interval is over.

So as you consider adding strategy to your racing, also consider what the next part of that is. And that would be settling into your goal pace, the one you can maintain through the end of the piece.

What Comes Next After the Start Five

Once you’ve completed your start sequence and done those first 5 strokes, you want to go into anywhere from 5 to 10 strokes that are very powerful and strong.

Use these to take advantage of feeling good, getting the flywheel moving, and burning off some of the initial adrenaline.

Then on the 11th stroke, it’s time to slow your stroke rate by slowing your recovery, and using a big PUSH into the next stroke to try to maintain the same force you had on your start.

For anyone working with people over 50 in your classes or clients, the sprint start is a key tool to have in your back pocket to keep your active agers safe and having fun.

Older rowers love competition and working hard, too, so this “zesty” way of getting moving is always a popular one!

Remember to cue them to push with their feet first, keep their core engaged, and their layback short initially. Then, as they lengthen their strokes, they can settle into their working pace.

Want to see a sprint start in action? Check out this video with Master Instructor Cassi Niemann, then row along with her!